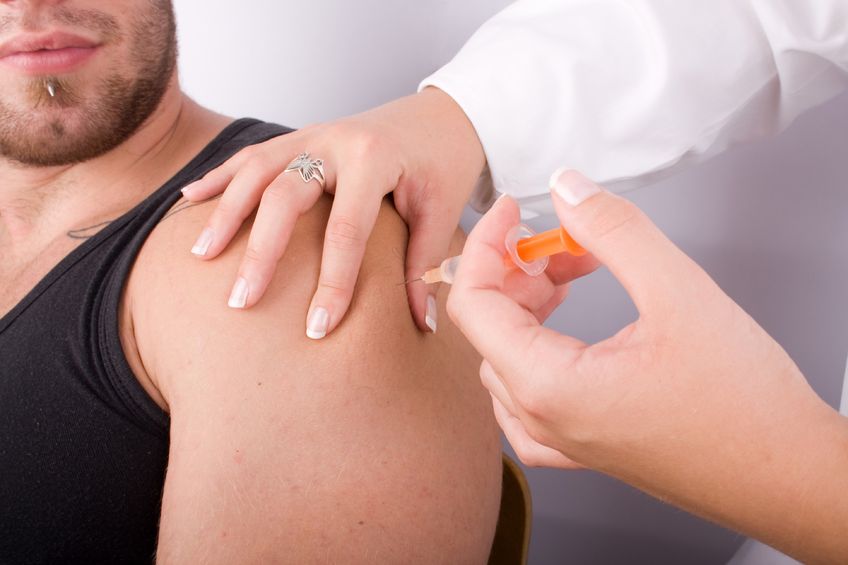 Musculoskeletal injuries that lead to swelling are common for athletes and non-athletes alike. Every day Physical Therapists treat patients suffering from pain and limited use of the injured area caused by inflammation. While inflammation is a natural process, it can also hinder healing. Properly reducing inflammation can help the body part to heal and enable the patient to return to their pre-injury status.

The inflammatory process occurs immediately in an acute injury as the body’s natural way of protecting that area. By increasing blood flow, this process alerts the body to injury, stimulates healing and attempts to remove harmful stimuli. More specifically, the inflammatory response is a histological response, affecting the blood vessels and surrounding tissue in the injured area. The arterioles dilate which increases blood flow to the area. The capillary bed becomes more permeable which allows fluid, proteins, Neutrophils and Macrophages to move into the interstitial space. The interstitial space is only supposed to have “x” amount of fluid in it and this process added more volume. The space then has “x+” amount of fluid leading to increased pressure. This increase in volume is a result of the “chemical” process of inflammation.

Inflammation is like waving a red flag of alert to the body. Pain, immobility, swelling and heat are all symptoms and signals to the brain that an injury has occurred. While these symptoms alert the brain, they can also cause problems. The affected area of the body may “shut down,” and the more severe the injury, the more severe the body’s reaction will be.

If suffering from acute inflammation, the use of the RICE principle is recommended as an initial response. RICE stands for Rest, Ice, Compression and Elevation:

For the first 24-48 hours rest is essential, especially rest of the injured area. Using the injured body part can cause more damage, prolong the injury and worsen the symptoms. “Playing through the pain” is not a good idea and depending on severity may not even be possible.

Apply an ice pack right away to the injured and painful area. Ice “pulls” the heat out of the injured body part thus reducing the tissue temperature and slowing down or stopping the “chemical” process of inflammation. The by-product of many chemical processes is heat and by eliminating the heat the process is slowed down or stopped.

Note: Adding heat to an acutely injured area will worsen the symptoms.

Ice is a great analgesic. It slows down the nerve conduction of the pain signal. The area that is iced for a prolonged time (it can be applied 24/7 if the ice is not directly in contact with the skin) will become less sensitive and at times numb.

Using an ace bandage, wrap the injured area. Wrap it snug, but not tight enough to cut off circulation. This will increase the “outside” pressure and help to keep some of the cellular fluid in the cell. With the cell wall becoming more permeable, the laws of osmosis apply. The cellular fluid begins to flow from the high-pressure area to the low-pressure area. In this case, the cell pressure is greater than the interstitial space pressure, which allows the fluid to flow out of the cell and into the interstitial space. If possible, raise the injured body part above the heart. Gravity will help cause the excess fluid flow back to the spleen, kidneys and heart via the lymphatic system, thus reducing the accumulation of fluid in the injured area.

Use the RICE principle for the first 48-72 hours after injury in regular intervals of four to six hours. NSAIDs are often bought over the counter (e.g. Advil, Aleve, Motrin, and Aspirin). The doctor can also prescribe a stronger dosage, which can have a more dramatic effect on the symptoms or reduce the amount of medication taken in a given 24 hour period. NSAIDs are thought to “work” by preventing the COX (cyclooxygenase) enzyme’s action during the inflammation process. The COX 2 enzyme is active during an injury to muscle or joint and is thought to be the primary stimulus to the inflammatory process.

There are two COX enzymes (1 and 2) and the COX 1 enzyme protects the lining of the stomach. A lot of NSAIDs inhibit the function of both enzymes, therefore they can cause the lining of the stomach to become irritated and bleed. This is one of the biggest drawbacks of these medicines. Some medications like Celebrex, Vioxx, and Bextra are more successful at inhibiting only the COX 2 enzymes sparring the stomach lining. Vioxx and Bextra are no longer available in the United States.

Severe inflammation or long-term inflammation may be treated through steroid injections and oral steroids. The mechanism of action of a steroid is thought to be at the cell level. The cell nucleus is affected and the action of the steroid effects the action of the inflammatory agents primarily cytokines. These drugs can be delivered orally which becomes a systemic drug and an intraarticular injection is localized to a specific joint. The effects of the steroid can be dramatic and reduce the inflammation significantly. This in turn decreases the pain level and helps to enhance the healing process.

There can be some negative side effects of steroids, but in most cases by limiting the dosage of the steroid can eliminate these side effects. The “horror stories” of cortisone use can be related to the excessive use of the injections and a fat-soluble drug, which could remain in the system for several months. Today, most doctors will inject the same joint a maximum of 2x per calendar year. The drug is water-soluble and will vacate the system within 4-6 weeks.

Inflammation is the body’s natural way to signal the brain that an injury has occurred. It is a naturally occurring process and it helps to protect the body, which is the first phase of the healing process. Reducing inflammation can also play an important role in long-term recovery.