In the past, there were few options for hip pain. The most common treatments included rest, ice/heat, exercise, and NSAIDs, and people had to limit activities including sports. New treatments have potential to overcome these limitations. During the last 15 years, researchers have made dramatic improvements on minimally invasive surgical tools designed and manufactured to be used on the hip joint.  Better diagnostic capabilities and new surgical techniques makes it possible to treat many hip conditions, helping people return to a pain free life.  For athletes, this can mean a return to their favorite sports. Determining their underlying pathology can help determine if they can become pain free.

The hip joint consists of the Head of the Femur and a deep recess in the pelvis called the acetabulum.  The joint is a deep “ball and socket” joint which is great for mobility but sometimes not so good for stability.  Fortunately, the hip is able to withstand most of life’s activities due to its design.   The femoral head rests in the acetabulum and can articulate in all planes of motion. The deep setting provides a great deal of stability and the joint is encapsulated with very thick, leather-like ligaments.

Hip pathology in young, adolescent athletes is thought to be partly due to the effects of certain athletic movements that put stress and strain on the developing joint.  There are certain sports that pre-dispose a young athlete’s hip to sheer and compressive forces that appear to change the way their hip joints develop. The developing/growing bone is very malleable until the growth plates close.   The repetitive movements and motions put abnormally high stress on the developing joint and the bones. This continued stress over time produces more bone in the response to the stress or irritation.  When this happens in the hip joint, the young athlete’s hip(s) might not be congruent and “bony” blocks begin to occur.

Two primary areas of the hip are effected in these young athletes.  The condition has been given the medical name of FAI or Femoral Acetabular Impingement. This condition occurs when the acetabulum rim develops too much bone around the femoral head (pincer lesion) or the area of the femur below the femoral head, known as the femoral neck, becomes thicker with more bone (cam lesion). When FAI is present, there is not always pain, but this condition pre-disposes many of these young athletes to hip pathology in the future.  Soft tissue, cartilage and bony changes can occur if the FAI is untreated. Fortunately or unfortunately, not everyone with FAI experiences immediate pain in their hip. Some athletes compete for years before the symptoms of FAI become more prominent and have to be addressed medically. 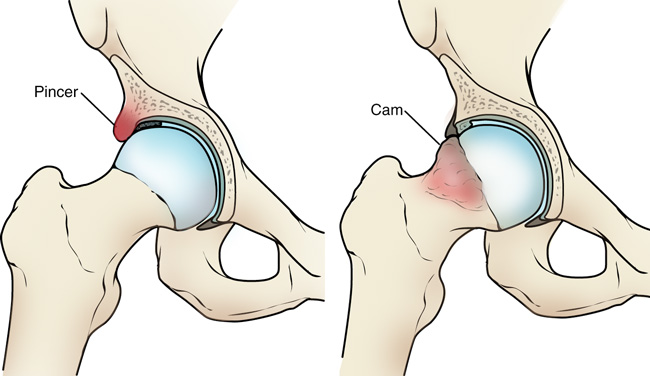 Sports such as soccer, hockey, football, gymnastics, cheerleading, and water polo are considered high risk sports that can lead to the FAI condition.  The vigorous activity and motions in the hip joints that occur during these sports can irritate the soft tissues around the hip joint as well as the bones.  The irritation of soft tissue produces pain in the groin area most of the time, but some athletes also complain of pain in the side of the buttock.

Some studies indicate that certain young athletes are prone to developing FAI, leading to labral tears or osteoarthritis later in their lifetime.  It appears that the younger the athletes start to train and compete in certain sports, the more likely they could develop FAI.  Studies indicate that most athletes should wait until they are older than 12 to participate in these high-risk sports.  Unfortunately, it is very difficult to convince young athletes to avoid playing their sport during a growth spurt. They would wise to stop participating during those periods of time to limit chances of developing hip pathology in the future.

FAI has been diagnosed and treated successfully in the past couple of years due to new diagnostic and treatment techniques and equipment.  The rehabilitation time is lengthy (3-6 months minimum in most cases), but in most cases the athlete can return to pre-injury status.  In many instances, the young athlete is better conditioned following the rehabilitation process.   Seeking the advice and treatment from a Physical Therapist is the best way to rehabilitate a FAI injury after the orthopaedic doctor performs the necessary imaging studies to correctly diagnose the problem.