Healthcare professionals see patients suffering from anterior knee pain on a daily basis. Treating the pain requires strengthening the thigh and leg muscles without irritating and aggravating the injured area. Instead of typical squats and lunges, Physical Therapists introduce Spanish squats as a part of a well-rounded routine that includes strengthening and stretching exercises for the core and lower extremities. This regimen can usually reduce the pain in the anterior aspect of the involved knee.

Strength development is dependent upon the “over-load” principle of the involved muscles.  A muscle mass will respond to an “over-load” of resistance by getting strong enough to “handle” the increased resistance force.  The muscle responds to the higher resistance load by developing bigger muscle cells.  The growth of the muscle cell increases its ability to generate force which makes the muscle “stronger”.

When a patient is diagnosed with anterior knee pain that originates from the tendon tissue that is located in that aspect of the knee joint, the muscles have to be strengthened without irritating the tendon tissue and causing more inflammation and pain.   The tendon attaches the muscle to the bone and when the muscle is not strong enough to “handle” the forces that are placed on the joint the tendon absorbs more stress and stain than it can handle.  Excess stresses and strains on the tendon tissue can cause damage to it and lead to injury and pain.

The healthcare professional needs to incorporate exercises into the rehabilitation process that will strengthen the muscle and not cause more damage to the tendon.  Exercises that are commonly used to accomplish this task are squats and lunges. A “routine” squat sometimes puts too much pressure on the front of the knee and causes more pain.  A more suitable option is called a Spanish Squat. 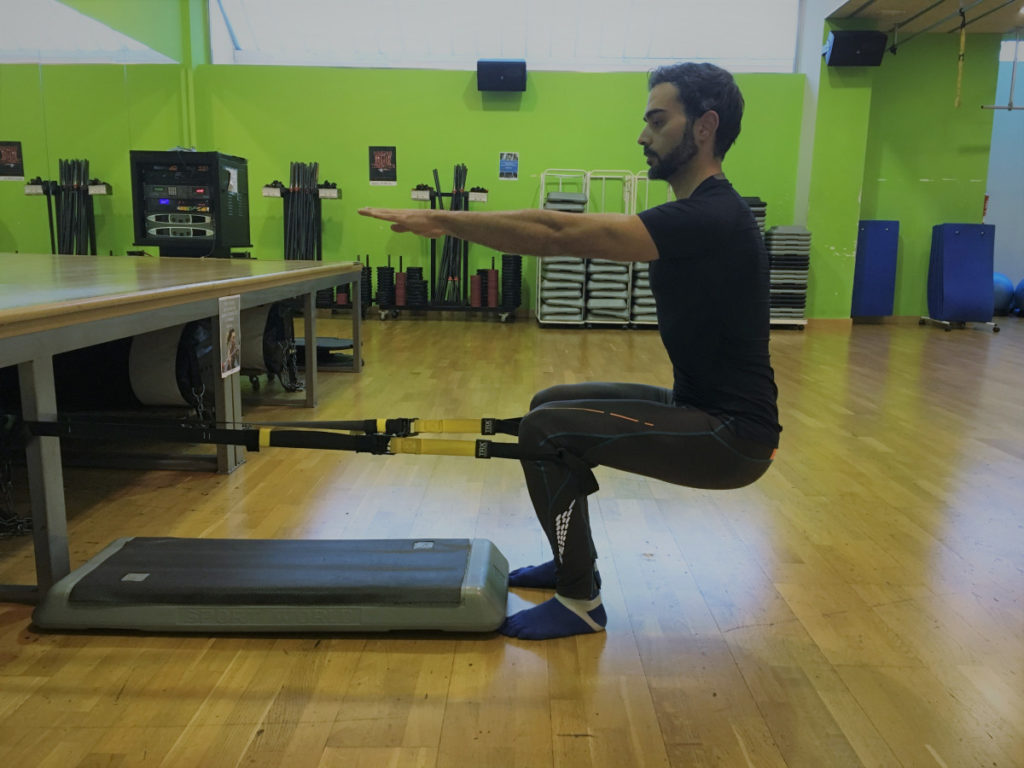 The Spanish Squat is used to generate strength in the lower extremities without “over loading” the anterior knee structures.  The exercise involves placing a non-elastic strap behind the knees of the patient and tying the strap to an immovable object. The patient leans back against the strap and squats down to a knee flexion of 70-90 degrees.  Their knees do not translate towards their toes and their shin bone should remain perpendicular to their ankle. The patient should keep their torso upright and not lean forward.  The squat should be “held” at a level that is not extremely painful in the front of the knee.  The “pain” that the patient experiences should be due to the muscle fatigue in the thighs and buttocks.  The eventual goal is to perform 45 second holds 5x several times per day.  There should be a reasonable amount of rest between squat/holds and can be as long as 2 minutes.

The theory behind this exercise states that the “load” on the tendon can inhibit the pain signal that is sent from the tendon tissue to the brain.  When the nerve signal is interrupted the patient does not experience pain when they “load” the tendon with the squat exercise.  Eventually the patient should be able to perform a “regular” squat or lunge without experiencing pain in the front of their knee.

Anterior knee pain is one of the most common ailments that are treated in out-patient Physical Therapy centers.  The use of the Spanish squat has proven to be a reliable exercise that enables the patient to complete other weight bearing exercises due to the analgesic effect on the soft tissues.  Utilizing the Spanish squat routine might be a wise choice for all lower extremity patients due to its ability to increase muscle strength and not place excess pressure on the anterior aspect of the knee.